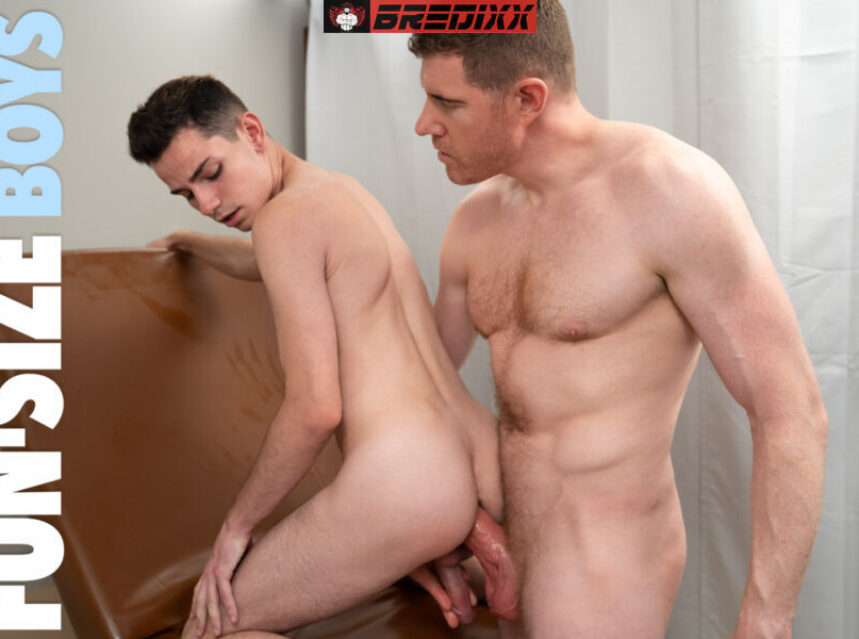 As Dr. Legrand Wolf began to take measurements of his small size, height, and weight, Eli Bennet couldn’t help but study the giant himself. He noticed how handsome he was, how his eyes seemed to continuously dip down to his, meeting his gaze momentarily before darting back to what he was supposed to be looking at. Eli couldn’t tell if he was checking him out or not, but when he took off his clothes, he felt the tension ratchet up.

Dr. Wolf tried to continue professionally and responsibly, but when it came time to check Eli’s loins, he couldn’t help but find himself getting aroused. The older man loved handling the beautiful boy’s cock and balls, feeling their weight in his big hands and seeing the shaft become erect from his touch. Eli was a beautiful specimen, and one that he needed to have for himself.

Taking a finger to Eli’s hole, the handsome daddy could feel the tight pressure of his insides squeeze his digit, indicating what it might feel like that fucking him. He was not a virgin, but he was like a vice even around his knuckle. As he worked his way in deeper, Eli began to moan, loving every second of the inspection and the way Dr. Wolf worked his rock hard shaft. Eli was sure this couldn’t be simply medical in nature, but he didn’t want to question it for fear it might stop.

When Eli was seated back up on the table, the young man took a chance and extended his hand out to touch the doctor’s crotch. To his delight, not only was it bulging with the concealed erection of the older man, but Dr. Wolf didn’t stop him. Instead, Dr. Wolf leaned down to meet his mouth to the boys, giving him a sweet, gentle kiss.

Dr. Wolf invited Eli to take out his cock, giving him a chance to see just how excited he was. Eli’s eyes practically bugged out of his head when he saw what Dr. Wolf had hidden in his pants. The massive ten inch cock was beautifully smooth and rigid down to the base, propped up by enormous hanging balls and ginger red hair. Eli felt intimidated by its size, but Dr. Wolf continued to kiss him and caress him, making him feel more trusting of the older man’s intentions.

Dr. Wolf mounted up behind him, gently placing his penis at the entrance of Eli’s hole. Eli in turn guided the man’s cock to his sphincter, desperate to feel him open him up. It felt like an eternity before Wolf’s shaft began to move inside him, but once it did, Eli could feel every inch of his girth and length prying him open.

The bare cock slid smoothly and slowly, gripped tightly by Eli’s young hole. Dr. Wolf could feel it begin to relax, but it stayed firm on him the entire time he worked his way in. Eli’s cock leaked precum, seemingly in responses to his shallow thrusts. He didn’t want to push Eli too fast, but his desire to breed him was becoming too strong to hold back.

Turning Eli around, Dr. Wolf let the young man bounce on his cock, allowing him to control the speed and depth of the fucking. It was enough to give Eli the chance to open up and get more used to the massive cock, but Dr. Wolf’s patience could only hold out for so long. He wanted Eli badly, and he felt so good on his cock.