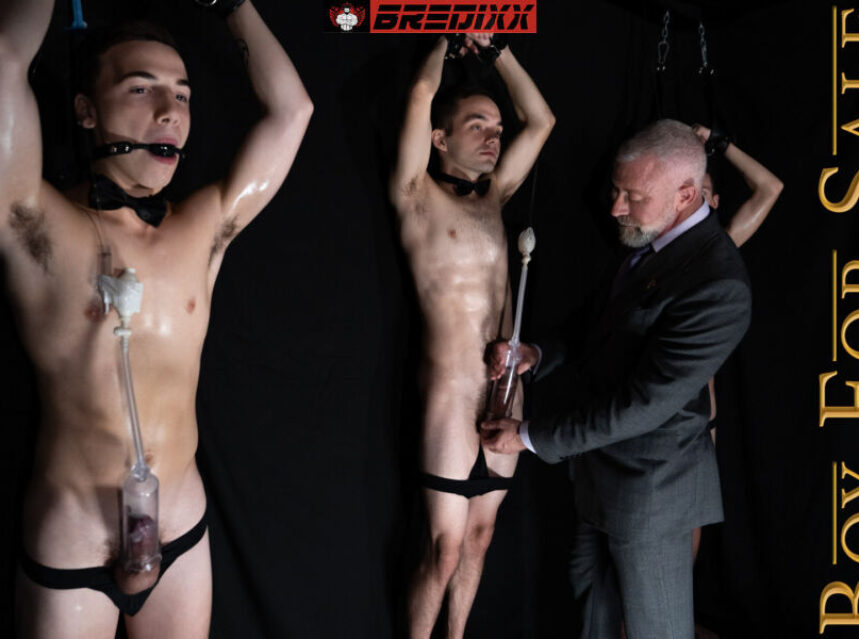 It’s time for Boy For Sale’s “Milking the Slaves” with Cole Blue and Lance Charger. I was particularly excited for the opportunity to milk Cole. Having the opportunity to work him over is always a joy. But today, knowing that I can focus just on his larger, beautiful cock… well, that’s a gift in and of itself.

As I removed him from the milking wall, seeing him trussed up aside other slaves desperate to be relieved of their aching testicles, I took my time to appreciate Cole’s body. He glistened with perspiration, clearly worked up from being edged for hours. I knew I could solve his problem in moments, but I wasn’t ready to let my satisfaction end so quickly. Putting him up on his knees, I took his throbbing manhood in my hand, teasing the head of his shaft before giving him the long, lingering sensations of wet, warm strokes. I watched his balls pulse upward, clenching as I brought him closer and closer to orgasm. I tried to pace myself, delaying the release as long as possible, but he was dripping pre-cum before I even touched him.

His breathing was deep and quick, making sounds of pleasure that escalated the more I touched him. I listened to his breathing, waiting for the sign that we were past the point of no return, and then I let him go… The eruption from his cock was like nothing I’d ever seen before. Ropes of white fluid gushed from him, pouring out in beautiful arcs through the air. His testicles must have been painfully full before I released him. He spewed all over my hand, his body, and the platform he was on. There was enough there that it should have been saved and bottled.