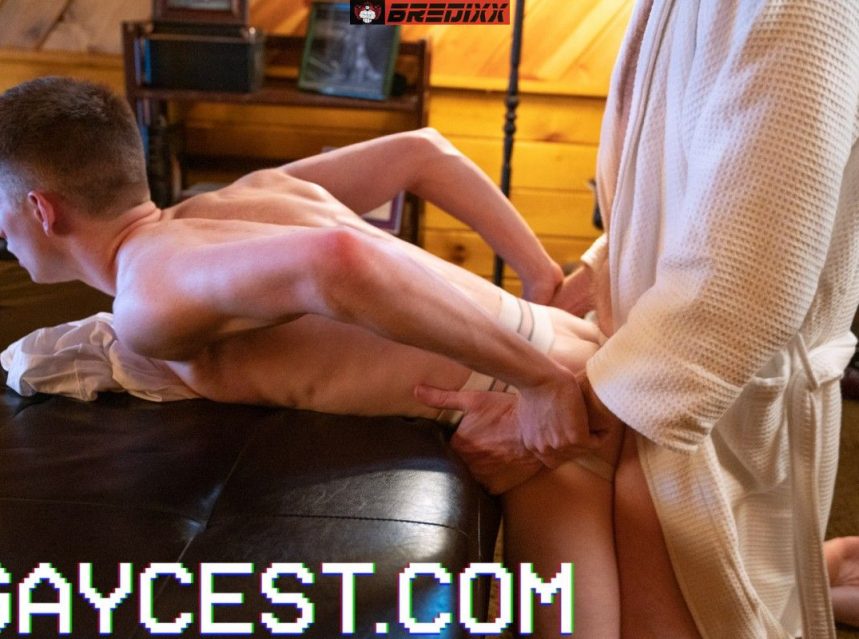 In Chapter 9 of The Doctor’s Son by Gaycest, Dr. Legrand Wolf enjoys his stepson Jonathan’s beautiful butt. Jonathan understands what it means to be a “good boy.” Not only is he respectful and obedient with his old man, he knows that it’s a father’s prerogative to take his boy when he needs to. It’s his right–his claim to his flesh. Jonathan understands that sometimes a father just needs to breed his boy, and he needs to let him.

When Jonathan was playing one of his games, Dr. Wolf couldn’t help but notice just how perky his boy’s smooth, soft cheeks were. Dr. Wolf was sitting in a chair, relaxing with a book while his son was engaged in his console. With his legs up and moving back and forth playfully, the meat of Jonathan’s ass made the most enticing shapes. He wanted to leave the boy alone to enjoy his down time, but when his member poked up in his jock, Dr. Wolf couldn’t stop himself.

Leaning forward, Dr. Wolf spread the boy’s legs apart, separating his cheeks just enough to see the smooth, pink hole. Jonathan knew what this meant. He knew well that his old man was going to breed him, so he tried his best to get to a spot to save his game. He couldn’t say no to him. He was his dad! But the older man leaned forward and said, “it’s okay… keep playing.”

Dr. Wolf pulled out his manhood and began stroking it. He rose up to meet Jonathan’s ass, pressing the head between his cheeks. Dr. Wolf wondered if he should stop; give the little guy a break and let him enjoy his game. But seeing the pre-cum begin to bead out of the tip of his shaft, he knew he wasn’t going to be able to stop what was already in motion.

He slid himself into Jonathan’s hole, feeling it struggle to open to take him. He didn’t resist, but it wasn’t easy. Pacing himself off of Jonathan’s body, Dr. Wolf worked his way inside, going in a fraction of an inch every few seconds. It was excruciating not being able to go in further and faster, but Dr. Wolf knew it was his boy needed.

Jonathan tried his best not to show any discomfort. He wanted to be a good boy and take his old man’s tool without issue. He was a little pained at first, but as his old man began to pump into him, he felt the deep pleasure that only he had been able to give him!