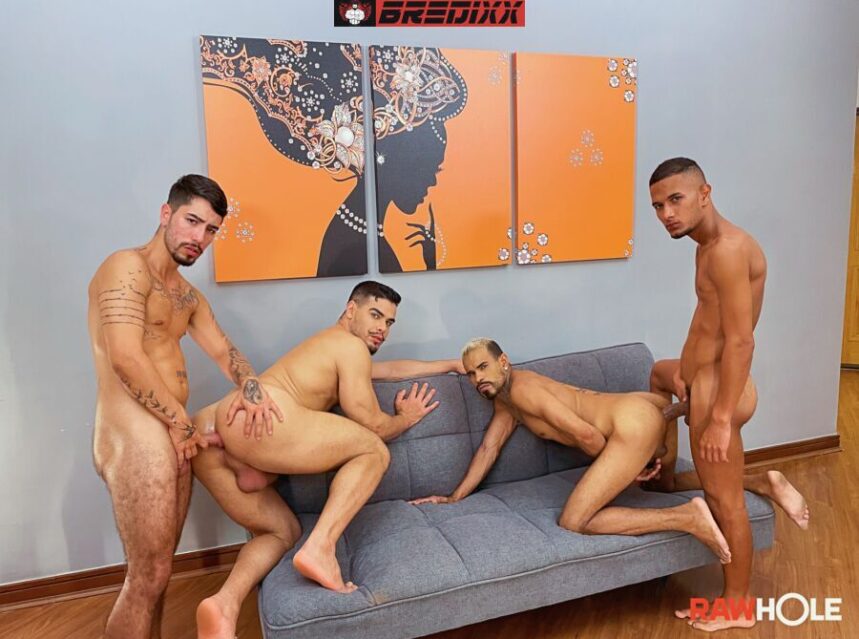 In this crowd Rico’s thick 8.5″ tool is a mere blip on the radar, and it looks like he’s happy to be a bottom for these megahung raw fuckers. On the couch this dickheavy foursome pair up and start making out. Giant dicks stick straight out nearly a foot in front of these tight-muscled cockslingers. Ronny gets on his knees to wrap his mouth around Malandro’s massive tool.

Meanwhile Bruno is faring better getting Rico’s human-sized dick down his throat, slurping down one nut at a time and getting ready to plow the handsome muscleboy. Leaning back on the sofa Malandro and Bruno get their knobs slobbered on as slick hands beat their big thick shafts. Bruno kneels behind Rico and burrows his tongue deep into the stud’s dickhungry hole. Rico wags his ass enticingly as Bruno licks and lubes Ronny’s butthole.

With the two bottoms wet and ready to get plowed, Malandro makes the first move, sliding his massive meat in to the root. His smooth nuts slap against Ronny’s slick buttcrack as Bruno rams into Rico’s muscle booty. Moans get louder and deeper as Rico and Ronny get stuffed with 19″ inches of bare cock. They switch partners and Rico feels his ass filling up with Malandro’s giant plunger.