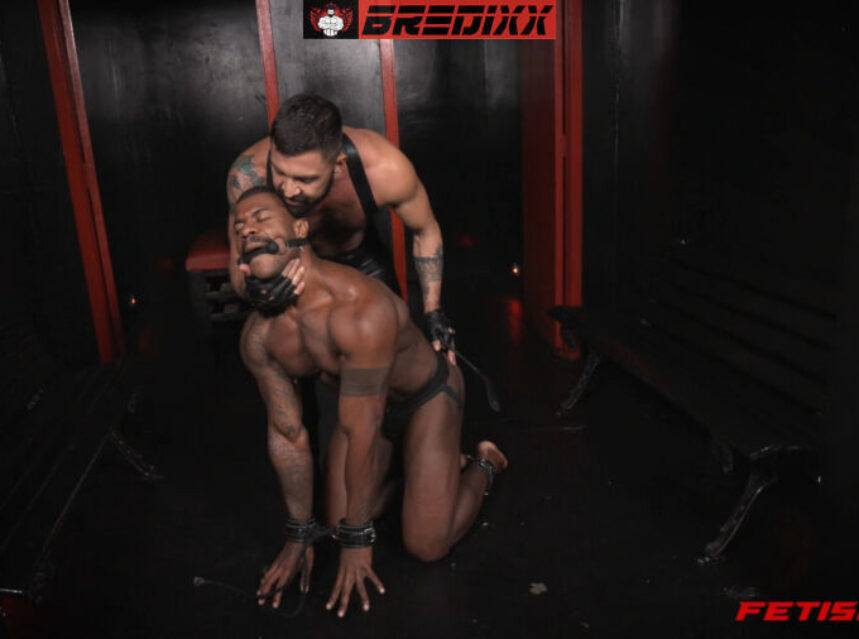 It’s sometimes even more exciting to see a dom/sub scenario play out between two dominant tops, watching a butch, tough top submit to someone more alpha and dominant. This is the case when macho top stud Black Muscular Brazil is led in, cuffed and with a black bit holding his mouth still and immobile.

Dominic is the UberDom of this pair, gruffly calling the shots and taking every effort for his own gratification. He knows that giving himself the reins of total freedom makes his macho submissive satisfied, and is comfortable being the unquestioned BOSS. Dominic sports a hot black leather suspendered overall, leather fingerless gloves and a fierce black paddle. BMB is given the instruction to refer to him only as “Master Pacifico”. “Yes, SIR” the submissive responds, struggling to speak through his mouth bit. Dominic’s leather paddle tenderizes BMB’s muscular hairy chest and pierced nips.

He yanks the submissive’s head back up to attention and makes sure he pays total respect and attention to Pacifico’s every whim. BMB crouches with his furry ass turned up to be his master’s pig hole. Getting multiple THWACKs from the paddle across his twitching butt makes BMB ready to grovel and worship, to lick his master’s shiny black boot. A cat o’nine tails drives home the point, stinging the handsome black stud’s thick butt. Dominic pulls out his XXL cock as he whips and spits in the slave’s face. “Thank you, SIR” the spit-covered submissive growls as Dominic steps away to prepare for the next punishment.