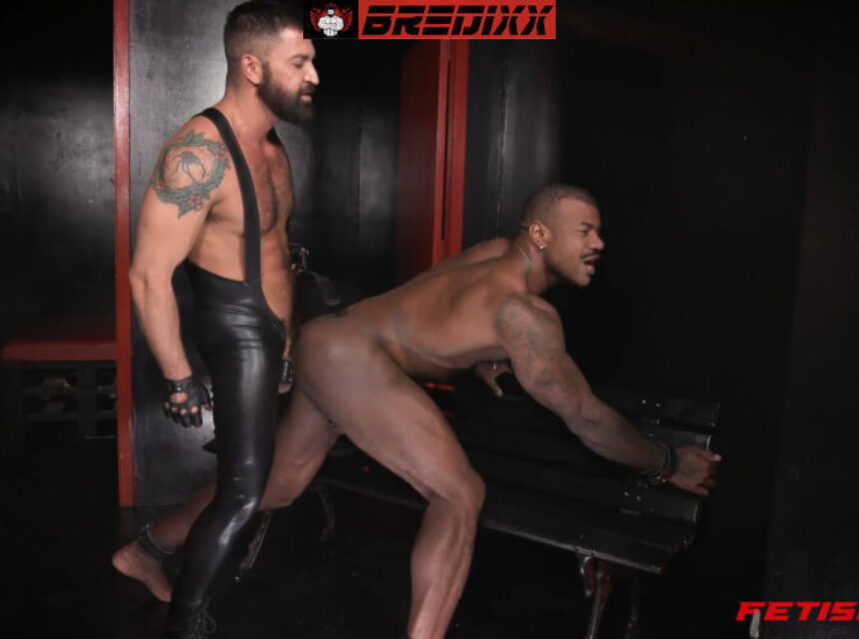 Taught to obey and submit, Black Muscular Brazil happily nurses on Master Dominic Pacifico’s stiff cock. His cuffed hands held together in a prayerful clasp of submission, he swallows Dominic’s uncut tool to the fuzzy pubes. “Take it all the way down to those fuckin’ balls. LICK my BALLS!” the tough master commands, and there’s nothing for BMB to do but obey and slather Dominic’s nuts with juicy spit. “Are you here to please your fucking MASTER?” Dominic barks as he fucks his thick prong down BMB’s cockhungry throat. “Thank you SIR!” BMB mumbles as he takes all his master can dish out.

With BMB on hands and knees in supplication, his muscular butt pointed back towards Master Dominic, the tough Dom crams his raw hairy cock in balls deep. “Give me that fuckin’ tight hairy ass!” he commands, and BMB bumps his booty back into the Master’s crotch. BMB holds onto a bondage bench as Dominic slams in harder. “That’s MY fucking pig hole!” Dominic yells and BMB happily groans “Yes SIR!” Domini slams his clenched fist against the meaty muscle of BMB’s butt. Almost breathless, BMB howls “Thank you SIR!” to answet each thrust and smack of Dominic’s paddle. With a series of powerful thrusts deep into his slave’s gut, Dominic squirts his sperm and breeds the hot black submissive. “Get out of my sight!” he orders, and pushes BMB away.